An Evening with Randy Fenoli of Say Yes to the Dress 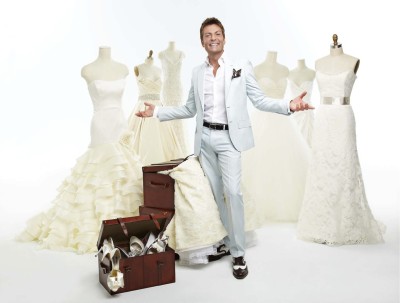 It is Randy Fenoli’s mission to “Educate, Elevate, and Empower” a bride to choose the most important dress in her life.

As the most trusted source in the Bridal Industry, it is Randy Fenoli’s mission to “Educate, Elevate, and Empower” a bride to choose the most important dress in her life and to realize her own personal beauty.

Born on a cattle farm in Southern Illinois, Randy is the youngest of seven children.  Driven by his fascination for design, Randy taught himself how to sew at the early age of 9.  Randy’s passion for fashion and design lead him to the prestigious Fashion Institute of Technology.  While at FIT, Randy won a number of awards for design and achievement.  Immediately after graduating, Randy launched two bridal industry collections: Randy Fenoli for the Diamond Collection and Randy Fenoli for Dressy Creations.  Randy is the recipient of two DEBI awards (Design Excellence in the Bridal Industry), the most prestigious award for bridal designers.   From 2007-2012 Randy worked as Fashion Director at New York’s Kleinfeld Bridal Salon where he would consult with nearly 15,000 brides a year.

Today as the star of TLC’s Say Yes to the Dress, Big Bliss, Randy Knows Best, and Randy to the Rescue, Randy is seen by millions of viewers each week.  On Randy to the Rescue, Fenoli travels the country with a semi truck filled with wedding gowns and accessories helping brides find their dream wedding dress at his ultimate pop up bridal salon.  Randy selects three lucky brides who have said “Yes” to their dress and then, with the help of a hairstylist and makeup artist, transforms these brides from “head to hem” and presents each with a  “bridal blueprint” for her wedding day.  With a philosophy that no matter what her size, age or shape, EVERY woman is beautiful, Randy seems able to overcome any challenge.

Randy has appeared as a guest on many television shows, including, Good Morning America, The Today Show, The View, Rachel Ray, Extra, Get Married, and The Martha Stewart Show. He has also co-hosted on Toronto’s number one rated talk show, The Marilyn Denis Show and served as main correspondent during TLC’s Royal Wedding live broadcast and event from Times Square.  Stepping outside of the bridal arena, Randy served as a fashion commentator for The Associated Press on the red carpet of the 2010 Academy Awards.

Fenoli frequently speaks at bridal shows, giving advice to brides through creative and entertaining stage presentations and personal consultations.  As a well-respected member of the bridal industry, Randy also speaks at many major bridal industry events across the globe.

As a writer and contributor, Randy is often featured and quoted in many publications such as People, Parade, and In Touch magazines and in nearly all of the bridal magazines, including, Brides, Inside Weddings, Martha Stewart Weddings, Bridal Guide, Bride and Bloom, Southern Weddings, Destination Weddings and Honeymoons, New Jersey Bride and Florida Bride magazines.  Besides posting his own blog on his website, Fenoli often acts as a contributor to other websites and blogs including theknot.com and TLC.com.  On November 1, 2011 Randy released his first book, It’s All About the Dress, the bride’s ultimate guide for shopping for a wedding gown.

Randy Fenoli’s appeal reaches far beyond bridal.  His natural charm and enthusiasm is infectious, making everyone who comes in contact with him feel “Beautiful”.

*VIP tickets include a meet and greet with Randy Fenoli