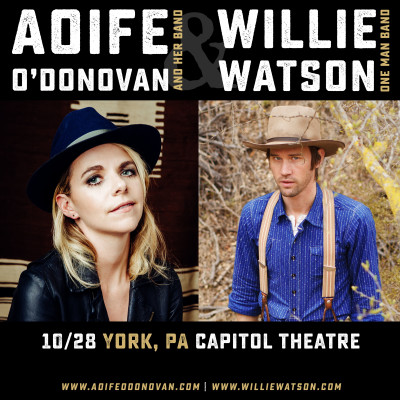 Aoife O’Donovan
In the quiet moments found between touring her first solo album and collaborating with mainstay folk and bluegrass peers, Aoife O’Donovan found the inspiration to write her sophomore album In the Magic Hour — out now on Yep Roc Records.

The songwriting process for In the Magic Hourcoincided with the death of O’Donovan’s grandfather, at age 93. She remembers him as a “gentle soul,” in the small Irish village of Clonakilty where he lived. The lyrics on “In the Magic Hour” are infused with a sense of loss and mortality’s dark certainty. But the album is just as much an ode to O’Donovan’s joyful childhood visits to Ireland. Aunts, uncles, grandparents and flocks of cousins would gather at the Clonakilty seaside to swim in the chilly ocean and sing together in the lingering Irish summer twilight. “In my memory it was sunny every day,” O’Donovan says. “Although that definitely cannot be true.”

The result of O’Donovan’s days of solitude is a 10-song album full of the singer’s honeyed vocals mixed with gauzy, frictionless sounds: splashing cymbals, airy harmonies, the leisurely baritone musings of an electric guitar.

Willie Watson
Looking like a man from leaner and meaner times, Willie Watson steps on stage with a quiet gravitas. But, when he opens his mouth and lets out that high lonesome vocal, you can hear him loud and clear.

His debut solo album, Folk Singer Vol. 1, was produced by David Rawlings at Woodland Sound Studios, the studio he co-owns with associate producer Gillian Welch in Nashville, TN, over the course of a pair of two-day sessions, for their own Acony Records label. The album spans ten songs from the American folk songbook ranging from standards like “Midnight Special,” “Mexican Cowboy” and Richard “Rabbit” Brown’s “James Alley Blues” to the more obscure, like Memphis Slim’s 12-bar blues, “Mother Earth,” Gus Cannon and the Jug Stompers’ “Bring it With You When You Come,” Land Norris’ double-entendre kids chant, “Kitty Puss” and St. Louis bluesman Charley Jordan’s sing-song “Keep It Clean.” Like the music, Willie can be murderous, bawdy or lustful, sometimes in the course of a single song, with a sly sense of humor that cuts to the quick. He counters a masterful bravado with the tragic fragility of one who has been wounded.

“There’s a lot of weight in the way Willie performs,” says Rawlings, longtime friend and producer of Watson’s previous band, Old Crow Medicine Show. “He’s had some tragedy in his life, which has informed his art. There’s an emotional edge to what he does because of who he is as a human being. Willie is the only one of his generation who can make me forget these songs were ever sung before.”