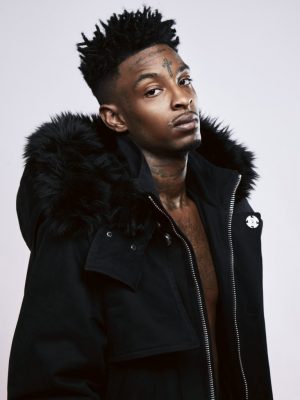 YORK, Pa. – York College’s Campus Activities Board will present 21 Savage at its annual spring concert at 8 p.m., April 21, in Grumbacher Sport and Fitness Center. Doors open at 7 p.m. Tickets for the event may be purchased online at ycptickets.com. Cost is $40 for general admission, with a limit of four tickets. Questions may be directed to cab@ycp.edu.

According to Spotify, 21 Savage is an Atlanta-based rapper who kicked off his career with the crew Slaughtergang. His first single, “Picky,” launched his solo career in 2014, and his debut mixtape, “The Slaughter Tape,” dropped in 2015. “The Free Guwop” EP with Sonny Digital landed that same year, as did a second solo mixtape, “Slaughter King.” In 2016, 21 Savage joined Metro Boomin for the collaborative EP “Savage Mode,” which climbed into the Top 25 of the Billboard 200 and peaked at number seven on the Rap Albums chart. Savage’s debut full-length arrive in the summer of 2017. “Issa Album” featured production by Metro Boomin, Southside, Zaytoven, and DJ Mustard, as well as an appearance by Young Thug on “Whole Lot.”

A private college located in southcentral Pennsylvania, York College offers more than 50 baccalaureate majors in professional programs, the sciences and humanities to its 4,400 undergraduate students. The College also offers master’s programs in business, education and nursing, and a doctorate in nursing practice. York College students enjoy a high-quality education that emphasizes practical application and a community invested in their success. The College provides a personal plan to help students focus their passions and attain their goals so they are prepared for a lifetime of meaningful careers – ready to meet the challenges of their profession and feeling confident and proud of their achievements.