Presented by JFS of York at Wyndridge Farm, PA 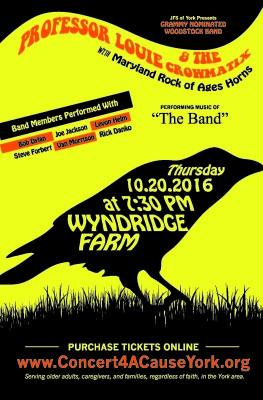 Join “Concert 4 A Cause York” at Wyndridge Farm in Dallastown, PA on October 20th at 7:30pm

Acclaimed band featured in a rustic setting for great cause!

Accompanied by Rock of Ages Horns, they will be featuring music from “The BAND” including The Weight, Ophelia, Atlantic City, The Night They Drove Old Dixie Down and more. Wyndridge farms craft beer and wine will be available.

Plan to dine at Wyndridge before the show on October 20th, 2016. Wyndridge will donate a percentage of food purchase to “Concert 4 A Cause York\”. *Valid with presentation of concert ticket.

Visit www.Concert4ACauseYork.org for more information and be sure to like us on Facebook at www.facebook.com/concert4acauseyork. Proceeds benefit JFS and their service to older adults, families and caregivers, regardless of faith, in the York area.

Plan to dine at Wyndridge before the show on October 20th, 2016. Wyndridge will donate a percentage of food purchase to “Concert 4 A Cause York”. *Valid with presentation of concert ticket. Seats are General Admission. Cash bar available for craft beer and cider.