Concert: Panic! At The Disco 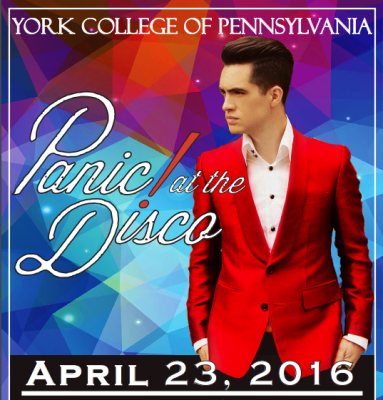 Nationally know rock-band, Panic! At The Disco, will be performing at York College of Pennsylvania on April 23, 2016 at 7pm.

Nationally know rock-band, Panic! At The Disco, will be performing at York College of Pennsylvania on April 23, in the Grumbacher Sport & Fitness Center.

Known for their hit songs such as "I Write Sins Not Tragedies", and "Victorious", Panic! At the Disco, is a crowd favorite. Their newly released album "Death of A Bachlor" is currently sitting at #1 on the Billboard 200.

This concert is open to the general public. The venue is standing room only.

Tickets are $35 each. and may be purchased online via credit card.

CONNECT WITH Yor College of PA- Campus Activities Board