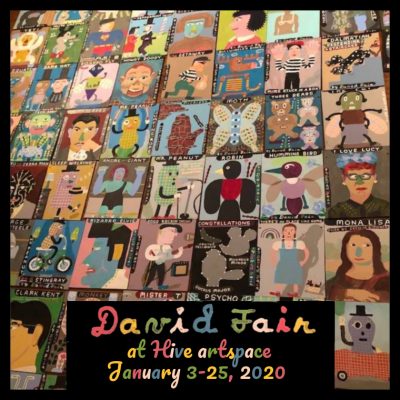 HIVE artspace is excited to bring the strange and unusual art of David Fair to York for our January exhibit.

HIVE artspace is thrilled to be hosting the art of David Fair for our January exhibit! The exhibit features upwards of 250 pieces, all of which will be very affordably priced at $85 each or 2 for $150 (except for the framed papercuts). Artwork can be taken as it is purchased, so get here early if you want first pick of this wonderfully eclectic artwork!

Meet David in person at the opening reception from 5-9 on First Friday!

About David Fair:
David is an artist based in Westminster, MD. His artwork has been displayed in galleries in New York, Boston, San Francisco, Paris, Austin and Waxahatchi, Texas as well as Baltimore, Thurmont and Westminster, Maryland, and can also be found on album covers, books, magazines, t-shirts, post cards, and more.

In addition to being an artist, David also has vast experience in the music world. He has played in the bands Half Japanese, CooCooRockinTime, Nine Lives Pussy, The Abraham Lincolns, Big Fair, The Junk Tinklers, Bang Bang Lulu, Spank The Bullies, Jad and David Fair, and has recorded with The Tinklers, Pep Lester, and Old Songs. David’s songs have been recorded by Yo La Tengo, Daniel Johnston, Times New Viking, The Gladeyes, Jad Fair, Boister, Bald Mountain, Lurch and Holler, R. Stevie Moore, The Lefties, and The Tinklers. David also appeared in the films The Band That Would Be King, The Devil and Daniel Johnston, and Everybody Loves the Tinklers.

We hope you enjoy this fun and funky exhibit!