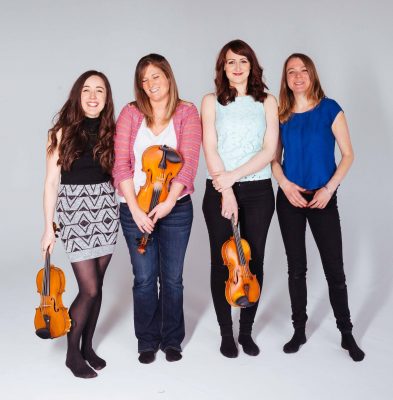 Fara brings together four musicians at the forefront of today\’s young Scottish folk scene: Jennifer Austin, Kristan Harvey, Jeana Leslie and Catriona Price. Their three fiddles and piano produce a fiery sound rooted strongly in their upbringing amid the music of Orkney.

\”These girls will go far. They sing and play like they mean it.\” —Douglas Montgomery

Friends since early childhood, the girls grew up under the musical guidance of Douglas Montgomery (The Chair, Saltfishforty). The three East Mainlanders of the band were in fiddle group Hadhirgaan at Kirkwall Grammar School. Kristan, a West Mainlander, was in Jenny Keldie\’s Shoramere at Stromness Academy. The four girls then went south to study, and earned degrees from The Royal Conservatoire of Scotland, Strathclyde University, The Royal Northern College of Music and The Royal Academy of Music. They have all since established themselves in the Scottish music scene, winning prizes along the way which include the BBC Radio 2 Young Folk Award, The BBC Radio Scotland Young Traditional Musician of the Year, The Deutsche Bank Award in Performance and Composition, and the Danny Kyle Award.

With vibrant arrangements full of rich harmonies, energetic fiddle playing and driving piano, Fara\’s show is sure to be an exciting one. With a mixture of self-penned and traditional Orkney tunes as well as stunning vocals, the girls\’ combined musical experiences and friendships produce an exciting and individual sound.