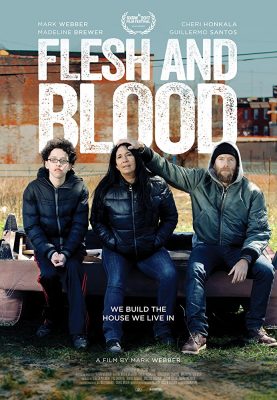 Based on a real family, Flesh & Blood blurs the line between narrative and documentary, with characters played by their real-life counterpar

Based on a real family, Flesh and Blood blurs the line between narrative and documentary, with characters played by their real-life counterparts. Writer and director Mark Webber (Green Room, The End of Love) stars as a man who has just been released from prison and returns home to his impoverished neighborhood in Philadelphia. Mark attempts to rebuild his life and reintegrate into the community, but he struggles with staying sober, forging a bond with his half-brother Guillermo, and mending a strained relationship with his mother, who is played by Cheri Honkala, Webber’s real-life mother and the Green Party’s nominee for Vice President in the 2012 U.S. election. Hoping to move beyond the mistakes of his past, Mark seeks out his estranged, real-life father, who he meets for the first time in over 30 years. Will Mark’s life remain de ned by his own flesh and blood?