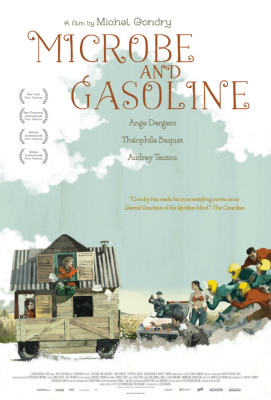 Two teenage friends embark on a road trip across France after building a house on wheels. PG-13 Released 7/1/16

Two young friends embark on a road trip across France in a vehicle they built themselves. Daniel, dubbed “Microbe” by his classmates for being small and generally non-confrontational, is a teenager struggling through the anxieties of puberty while living with parents so absorbed in their own anxieties that he does not receive the attention he needs or deserves. Enter the new kid, Theo, who receives the nickname “Gasoline” because he comes to school every day after working on engines and thus smells of motor oil and gas. Because both are considered oddball outcasts by the rest of the school—Daniel for his quiet demureness and Theo for his inability to keep his mouth shut—they become fast friends and begin forming plans to build a go-cart and travel across the French countryside together.