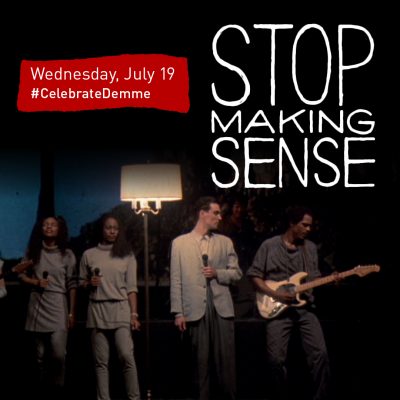 Join us on July 19 for a nationwide celebration of filmmaker Jonathan Demme! Heralded by many as the greatest performance film of all time,

“From the opening moments, when those white tennis shoes come into frame, revealing themselves from behind the shadow of the man wearing them, and the camera follows the shoes (and the man) out onto the stage where you see a radio set down—“Hi… I’ve got a tape I want to play!”—you know you’re in for something different. Something special is about to happen. David Byrne hits Play and then, for a period of time that never seems quite long enough, you’re put under a spell—the same trance everyone is put in when experiencing Jonathan Demme’s masterpiece, Stop Making Sense.

This July, the art house community, which Jonathan adored so much, will band together to shine their projector lamps in unison (or as close to unison as we could get!) to celebrate the man whose work touched us all so deeply.

And that’s the keyword here: CELEBRATE! If Pauline Kael could dance in the aisles over 30 years ago, we can still do it today!

I firmly believe there’s no better film for the job than Stop Making Sense—the greatest performance film ever made, a fantastic musical document, and 88 brilliant, beautiful minutes of the kind of pure cinematic joy that only Jonathan Demme could deliver.

Just be sure it’s played loud.”