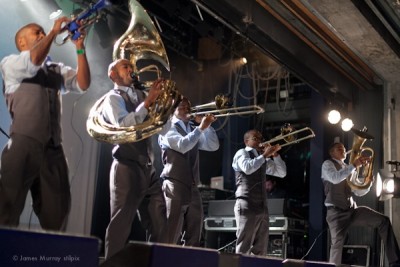 The HYPNOTIC BRASS ENSEMBLE is a family band consisting of seven blood brothers who began their musical training at the tender ages of four and five by their father, jazz trumpeter/band leader Kelan Phil Cohran (EARTH, WIND, & FIRE, CHAKA KHAN, SUN RA). The boys went on to form the PHIL COHRAN YOUTH ENSEMBLE in 1990. The family toured the United States performing the complex original written jazz compositions of Cohran and other greats such as Duke Ellington, Count Basie, and even the music of classical greats Bach & Beethoven. Although the group’s early musical training encompassed primarily elements of instrumental performance, the brothers were personally being exposed to the music of their own generation (hip-hop, rock, reggae to name a few) and absorbed these components into the cosmic jazz style of their father.