Imagining a Better World: The Art of Nelly Toll 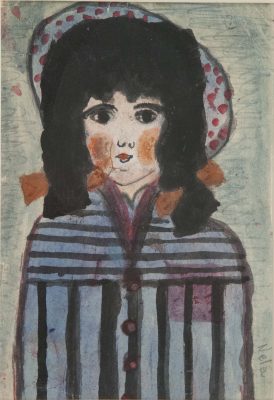 Images of paintings created by a hidden child during the Holocaust era is on display at Art Downtown this April as the Hanover Area Arts Guild presents Imagining a Better World: The Artwork of Nelly Toll.

The exhibit can be seen during regular gallery hour at Art Downtown, 32 Carlisle St., Hanover. It continues through April 29.

In 1943, a sympathetic Christian family hid Nelly Zygmunt and her mother from the Nazis in Lwow, Poland. In the next year, Nelly created five dozen brightly colored, detailed watercolor dreams of her ideal world. Those creations are in stark contrast to other artwork by Holocaust children, depictions that often are dark and foreboding.

The family that sheltered Nelly and her mother bricked over an outside window opening and placed a decorative rug over the interior. When visitors came to the apartment, the Zygmunts had to stand on the ledge of their secret window to escape detection.

After World War II, Nelly came to the United States. What began as an escape with the watercolor set her mother gave her became her career. She earned a master’s degree in art and art history and education from Rutgers University. She also attended the Academy of Fine Arts in Philadelphia and received a doctorate from the University of Pennsylvania. Toll has published three books on the Holocaust and related art.

Today, she lives in New Jersey with her husband, Ervin.

“Nelly dared to dream, imagining a better world that manifested in her creation of nearly 60 watercolor paintings,” said Alexandra Nicholis Coon, executive director of the Massillon Museum, which has organized the traveling exhibit. “This exhibition will present, for visitors, selected images of her journey of hope and imagination.”

Imagining a Better World: The Artwork of Nelly Toll is organized by the Massillon Museum, Massillon, Ohio, with support from the Institute of Museum and Library Services.