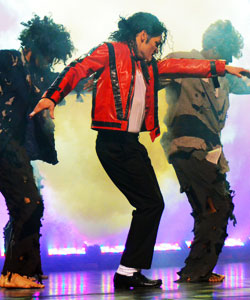 Back by Popular Demand!

From the early moments with his brothers in the Jackson 5 to his stratospheric rise as a solo artist to become one of the greatest entertainers of all time, this is the only show that brings back the spirit and the essence of seeing Michael Jackson live again on stage!

Masterfully performing the unique dancing that Michael was so famous for, two talented performers portray Michael at different stages of his dynamic career in this multi-media spectacular, featuring his greatest hits, including “Billie Jean,” “Beat It,” “Thriller,” “Smooth Criminal” and more!