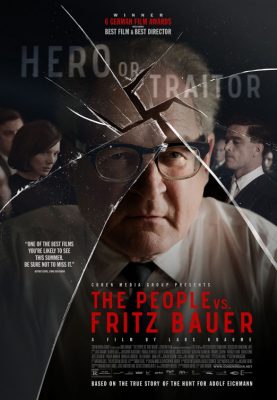 The film festival will show 3 films at Frank Theaters. This film is the second in the series : The People VS. Fritz Bauer.

The film festival will show 3 films at Frank Theaters. This film is the second in the series : The People VS. Fritz Bauer (German with English subtitles).
A Winner of 6 LOLA AWARDS (German Film Awards) including best film, best director, and best screenplay; THE PEOPLE VS. FRITZ BAUER is a historical thriller that dramatizes the obstacles that tenacious state attorney general Bauer faced in prosecuting the architects of Auschwitz while Germany’s postwar government was still infested with the same politicians who’d been in power under Hitler.

For more movie information and to watch the trailers, please visit out website under the events tab.