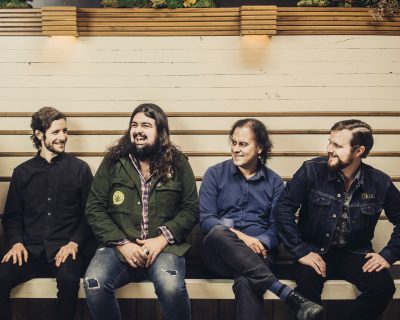 Kable House Presents is an independent concert series hosted at York’s historic Central Market House and featuring up-and-coming national touring acts in intimate evening performances. Join us December 7 as we welcome The National Reserve and special guest Ali Awan to our stage. Doors open at 7 p.m. and the show begins at 8 p.m. Arrive early to purchase food and beverages from our featured Central Market vendors. This is an XPN Welcomes show, presented in partnership with WXPN.

For nearly half a decade, The National Reserve has spent its Friday nights lighting it up at a Brooklyn bar, winning over barflies with epic sets and a remarkable breadth of songcraft and showmanship. Now, with their stunning new Ramseur Records debut album, MOTEL LA GRANGE, the band has captured every bit of that energy, emotion, and entertainment for all to hear.

Founded and fronted by singer-guitarist Sean Walsh, The National Reserve mine an archetypal musical seam, marrying gutbucket R&B, Laurel Canyon lyricism, New Orleans funk workouts, late night soul, and boozy rock ‘n’ roll to create their own timeless brand of American music. Songs like “Found Me A Woman” and the indelible title track reveal a gifted new tunesmith while masterfully reminding one and all of the simple beauty of a great American bar band – two guitars, organ, bass and drums rocking out in the corner, singing their songs to soundtrack the night.

Ali Awan is a Philadelphia-based artist. Born in Abington, Pennsylvania he grew up in Turkey and Saudi Arabia, finally settling back down in the Philly suburb where he would spend the rest of his childhood.

Awan began performing and writing collaboratively as a guitar and bass player in West Philadelphia basements/house parties at 14 years old.

While playing in various bands throughout his teens and early twenties, Awan eventually got interested in writing songs of his own. Once a touring member of the psych-boogie outfit Needle Points, he then spent time in LA-based Jane Church and has been writing, recording, and performing his own material ever since.