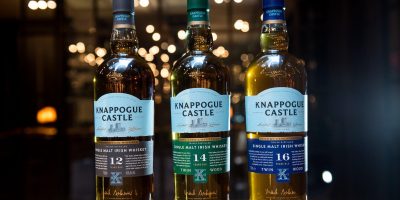 Join the #ttbar mixologists and Knappogue Castle reps for food pairings from Tutoni’s with Knappogue’s 12, 14, and 16 year whiskey.

Join the #ttbar mixologists and representatives of Knappogue Castle for a night of food, whiskey, and education. Enjoy four courses from Chef Dave in the kitchen (including a whiskey infused dessert) alongside Knappogue’s 12, 14, and 16 year whiskeys. Learn from representatives Eric & Dan about Knappogue’s process.

About Knappogue Castle:
“In 1966, Mark Edwin Andrews purchased Knappogue Castle, a 15th century castle in Ireland, which was then in ruins. He and his wife, a prominent architect, then embarked on an ambitious program of restoration, in an effort to return the structure to its original state of glory and grandeur. It was around this time that Andrews began buying casks of fine pot still whiskey from top distilleries in the country. The casks were further aged and bottled under what is now the Knappogue Castle label. His last bottling, a 1951 vintage aged 36 years, is revered by connoisseurs as the oldest and rarest commercially available Irish whiskey on the market. Many years later, his son, Mark Andrews III, would bring Knappogue 1951 and his father’s legacy to the United States and other international markets.

Knappogue Castle Single Malt Irish Whiskey is named for the castle which inspired it, but the word itself has a meaning of its own. Knappogue (pronounced Nah’ Pogue) translates to hill of the kiss in Gaelic. Such a romantic word is only fitting for such a beautiful and iconic landmark.”