Laugh Your Tuchas Off! 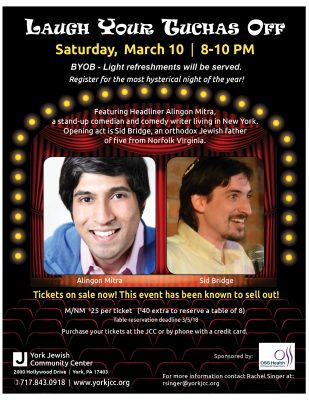 Register for the most hysterical night of the year!!

For one night only, the JCC transforms its auditorium into a BYOB Comedy Club.  Headliner Alingon Mitra is a standup comedian and comedy writer living in New York. He has written for THE DAILY SHOW WITH TREVOR NOAH on Comedy Central and ADAM RUINS EVERYTHING for TruTV. He has done stand-up on THE LATE SHOW WITH STEPHEN COLBERT, CONAN, LATE NIGHT WITH CRAIG FERGUSON, and ADAM DEVINE’S HOUSE PARTY. After becoming a semi-finalist on LAST COMIC STANDING, Alingon won the coveted “Comic Comeback” award to appear in the season finale. He was selected to be a new face at Just For Laughs Comedy Festival in Montreal in 2015. Alingon graduated from Harvard, where he was a writer for the illustrious Harvard Lampoon. Opening act Sid Bridge is an orthodox Jewish father of five who loves to work on cars, plays the bass guitar, and wears cowboy boots. He has been doing standup for six years and runs the weekly open mic show at Cozzy’s Comedy Club of Newport, Virginia. Sid is the co-founder of Geek Night Comedy, a geek-themed comedy/improve show at the Virginia Beach Funny Bone. The two together are a must see act, so grab your friends and get your tickets early. Seating is limited and only a table reservation ensures you to sit with those you want. This event is known to sell out!

For more information, contact Rachel Singer at rsinger@yorkjcc.org or purchase your tickets at the JCC Front Desk. 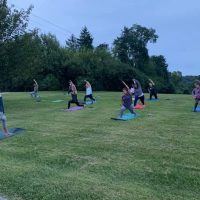