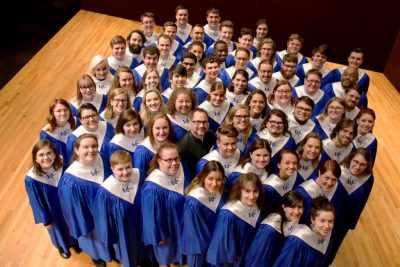 The Lebanon Valley College Concert Choir will present a concert as part of its 82nd annual spring tour on Saturday, March 24, 2018, 7:30 PM at St. John Episcopal Church, York, PA. Conducted by Dr. Matthew Erpelding, the 60-member ensemble will be joined by the Susquehannock High School choir. St. John Episcopal is located at 140 N. Beaver St., York, PA. The performance is open to the public, a free-will offering will be accepted to support local charities. The theme for the 2018 LVC Concert Choir tour is “Welcome to the Family,” and includes music from around the world that celebrates the bonds of family that we forge with each other. The Lebanon Valley College Concert Choir is one of two auditioned mixed choral ensembles at LVC. Concert Choir has toured each year, primarily in the Northeast, since 1936. In addition, the choir has been heard on more than 30 national radio broadcasts including National Radio Pulpit and Great Choirs in America. The choir has performed with the Harrisburg Symphony Orchestra and holds standing invitations to appear at the National Cathedral, Washington, D.C., and the Cathedral Church of St. John the Divine, New York City. Other non-tour appearances have included the Lighting of the National Christmas Tree, the Festival of Lights at the Washington, D.C. Temple Visitor’s Center, performing with the General Conference of the United Methodist Church, and appearances before the Pennsylvania Music Educators Association and the Music Educators National Conference Eastern Division Convention in Washington, D.C. The choir has toured internationally to Eastern Europe (1973), Great Britain (1999), Italy (2001), Central Europe: the Czech Republic, Austria, and Hungary (2007), and Norway and Denmark (2011.)