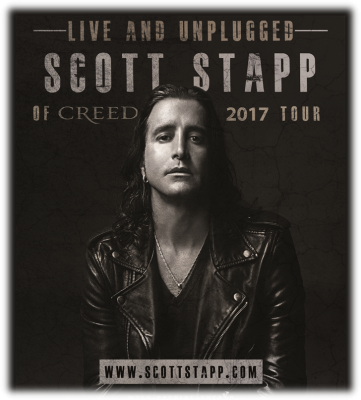 Live and Unplugged: Scott Stapp with special guests Art of Dying and Jeremy of Willet

Scott Stapp’s artistic and personal journey have encompassed all the talent and torment imaginable in scaling to musical success. The founding member of Creed chronicled his questions, his quest for answers, and his dreams from faith to fatherhood in chart topping hits, “My Own Prison,” “Higher,” and “With Arms Wide Open,” which dominated the sonic landscape of the 90s-2000s. His soul-piercing lyrics backed by thundering rock riffs garnered a Grammy award, and countless other accolades of creativity and chart domination, not to mention legions of fans, who felt a kindred spirit in his honesty.