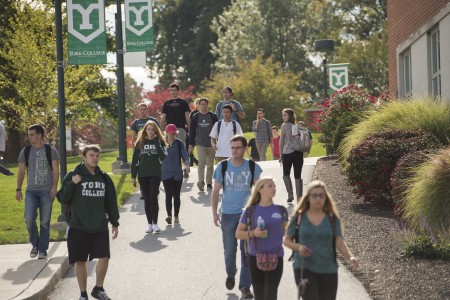 Luba Lukova, a New York based artist, will be coming to York College of Pa to discuss her internationally recognized work.  Lukova’s art is known for its distinctive use of metaphors, juxtaposition of symbols, and economy of line and text, to succinctly capture humanity’s elemental themes.  She was also recently named number one in the Huffington Post’s review “15 Women Artists Who Have Left Their Mark On Modern Design.”

Lukova is a critically acclaimed author of the Social Justice Portfolio and has had her posters displayed all over the world.  She has had her solo work displayed in many places including: UNESCO in Paris, France; DDD Gallery in Osaka, Japan; La MaMa Gallery in New York, and the Art Institute of Boston.  Her works are also in the permanent collections of the Museum of Modern Art in New York; the National Library of France in Paris; the Library of Congress; and the World Bank in Washington, D.C.

She has received commissions from Harvard and Columbia Universities, Sony Music, United Airlines, The New York Times, and the War Resisters League.  Lukova has received numerous awards including the Grand Prix Savignac at the International Poster Salon, Paris; ICOGRADA Excellence Award; and the Reisman Foundation grant.

Graphic Guts will take place February 24, 2016 in DeMeester Recital Hall at 5:30 pm.  There will also be a reception that will take place at 6:30 pm in the Evelyn and Earle Wolf Hall Lobby.