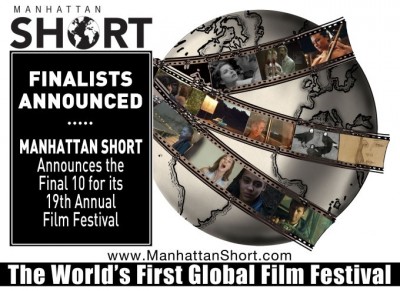 MANHATTAN SHORT began in 1998, when Founder Nicholas Mason screened 16 short films onto a screen mounted to the side of a truck on Mulberry Street,

Little Italy, in New York City. A year later, the Festival moved uptown to Union Square Park in New York City. In the aftermath of 9/11, MANHATTAN SHORT transformed into a worldwide phenomenon, becoming the only film festival on the planet that unfolds, simultaneously, in more than 250 cinemas on six continents, bringing over 100,000 film-lovers in all corners of the globe together for one week, via the next generation of filmmakers. MANHATTAN SHORT now receives over 600 short film entries from over 45 countries a year. Ten of these entries are selected as finalists in the annual Festival. This Festival is not just one of the largest short film festivals in the world, it is the world’s first global film festival, a global celebration and we are inviting you and your community to become part of it. And the judges of these films are you, the audience.

A Family returning by car from holiday is stuck in a traffic jam that ma put a permanent end to their trip courtesy of the government.

Overtime (Australia)
Director: Craig D. Foster
A conscientious man gets stuck working very at the office when he fears being out after dark.
Carousel (England)
Director: Kal Webber
An Older man doles out a torrent of accumulated wisdom to a teen who offers a surprising response.
Bravoman (Russia)
Director: Evelina Barsegian
Andrey is paid to rouse theatre audiences, a job he views with cynicism until he meets a woman who cries at every show.
Kaputt (Germany)
Director: Volker Schlecht & Alexander Lahl
An animated documentary explores Hoheneck, the main prison for women in the former East Germany.
Gorilla (France)
Director: Tibo Pincard
it’s 1952 Hollywood and Henry Corso performs as a costumed gorilla. So how do you get the leading lady to fall for a big ape?
Ella Gets A Promotion (USA)
Director: Richard Diaz & Mike Pusateri
A loyal and talented employee finally receives the promotion she deserves  but the new position comes with unexpected drawbacks.
I am a Pencil (‘Je Suis Un Crayon’) (Austrailian)
Director: Joe D’Arcy
Freedom of expression is the star of this animation inspired by the protest marches on January 11th, 2015 after the Charlie Hebdo massacre in France.
Hold On (The Netherlands)
Director:  Charlotte Scott-Wilson
A young, talented musician suddenly develops stage fright after one of her cello strings breaks during an important concert performance.
The Last Journey of the Enigmatic Paul W.R (France)
Director: Romain Quirot
Earth’s best astronaut disappears in a flying car prior to a space mission that will save the world.