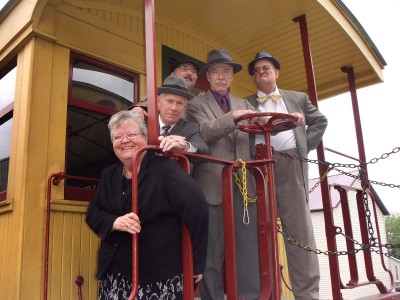 Otter Productions presents a Murder Mystery aboard the train. Help solve the mystery and enjoy the comedic shenanigans of this great group!

The Vampire Strikes Back

In his day, Boris Meyer was the king of monster movies. His portrayal of vampire Count Fangula frightened millions, but in 1979, Meyer couldn’t take the typecasting anymore and retired to a reclusive life at his secluded manor in the Hollywood hills. In the years since, he emerged only one time, with disastrous results: 15 years ago he was behind the wheel of a car that struck and seriously injured a famous Hollywood director. Now, there’s word that Boris will make his first public appearance in decades, as horror fans gather for “Fright Fest.” Will the demons of Boris Meyer’s past come back to haunt him?