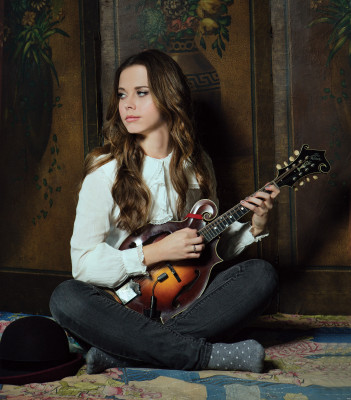 Sierra Hull, the singer and mandolinist and former child prodigy who signed with Rounder Records at age 13, and distinguished herself by becoming the first bluegrass musician to receive a Presidential Scholarship to the prestigious Berklee College of Music, released her first new album in five years, Weighted Mind, earlier this year via Rounder Records.

Bluegrass roots inform and inspire this soundscape, but bluegrass does not define or limit Weighted Mind. This is not bluegrass music, or chamber music, or pop music. This is original music, from a virtuoso who tells the truth and speaks from herself.

Alison Krauss, who has won more Grammy awards than any female artist in history, says of Hull, “I think she’s endless. I don’t see any boundaries. Talent like hers is so rare, and I don’t think it stops. It’s round.”

Hull wrote eleven of Weighted Mind’s twelve songs (and she arranged the twelfth tune), penning some with co-writers Jon Weisberger, Zac Bevill, and Josh Shilling, and writing “Stranded,” “Wings of the Dawn,” “Birthday,” “Lullaby,” “I’ll Be Fine,” and “Black River” on her own.

“The moment you start to be yourself, there’s an honesty about that, that people connect with,” she says. “This album feels like the story of my early twenties, of that searching. Now, it feels like everything worked out the way it was supposed to.”