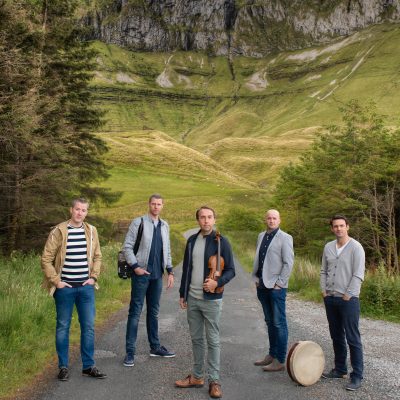 Join Susquehanna Folk as we bring one of the most respected bands in Irish Traditional Music to The Studio at The Appell Center!

Susquehanna Folk is excited to welcome this acclaimed traditional Irish group to York on March 6th! Téada (meaning “strings” in the Irish language) revels in the vibrant traditional music of their native Ireland. “If there is a better new band on the Emerald Isle, they must be very, very good,” Scotland’s Edinburgh Evening News wrote of Téada’s 2003 debut album.

Téada was founded in 2001 by Sligo fiddler Oisín Mac Diarmada along with button accordion player Paul Finn. They’re joined by Seán Gavin on flute and uilleann pipes and Patrick Doocey on guitar.

The band’s textural arrangements, charged with a vibrant energy, play up the structural intricacies of Irish traditional tunes passed down through generations. The Irish Times has praised Téada for “keeping the traditional flag flying at full mast.”

Téada captures the rawness and individuality of the solo artist within a modern group context. The band has headlined major music festivals throughout the US, Canada, Mexico, Europe, Africa, Russia, Israel and Australia. We are pleased to welcome them back for their third Susquehanna Folk concert.

Join us at The Studio at the Appell Center and start your month of celebrating Irish heritage right!

Tickets are available at the door or online at https://sfmsfolk.org/concerts/Teada.html

For the health and safety of our patrons and performers, SFMS requires all patrons to show proof of full COVID-19 vaccination. At this time there is no option for admittance with a negative COVID test alone. All patrons must wear masks regardless of vaccination status unless actively drinking.