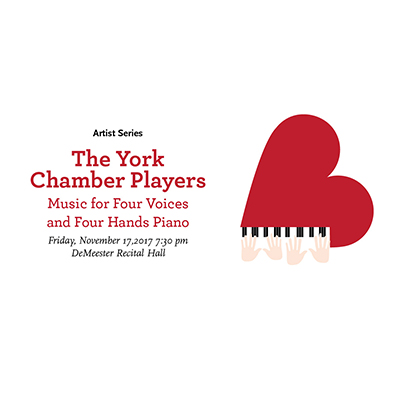 The York Chamber Players, comprised of York College faculty and guest artists, will perform a concert of chamber music.

The York Chamber Players, comprised of York College faculty and guest artists, will perform a concert of chamber music for four-hands piano and four voices on Friday, Nov. 17 at 7:30 p.m. in DeMeester Recital Hall on the York College Campus.

This unique combination of six musicians and one piano was most famously employed by Johannes Brahms in his song cycle “Liebesliederwaltzer”, composed in 1869, and later a second set of “Neue Liebesliederwalzer” in 1874. Loosely translated, these “New Love Song Waltzes” feature various European folk song texts and are charming musical miniatures written in the style of the traditional “Ländler” waltz. The York Chamber Players will pair the “Neue Liebesliederwalzer” with a contrasting new work by composer and pianist Stephen Hough entitled “Other Love Songs.” Hough was commissioned to write this work as a complement to the Brahms in 2011, and it is clever companion written for four voices and three-hands piano. These two contrasting works will feature York College faculty pianists Gretchen Dekker and Kenneth Osowski and vocalists Sarah Altman-Kopko and Erin Lippard. Joining the YCP faculty will be guest artists Jeffrey Fahnestock of Susquehanna University and Matthew Fritz from Elizabethtown College.

This York Chamber Players concert will last a little over an hour and is open to the public free of charge. DeMeester Recital Hall is located in Evelyn and Earle Wolf Hall near the Country Club Road entrance to the YCP Main Campus. For more information, call 717-815-1354.