The cast of Orangemite’s Studios will explore the deeply human troubles of magical island and its inhabitants in The Tempest.

Prospero has lived on this island of 12 years with his daughter Miranda. It’s finally his time to exact revenge on the people who took his dukedom from him and caused him to flee for his life. With the help of his fairy, Ariel, he creates a tempest that wrecks a ship with the king of Milan, Alonzo, Prospero’s brother, Sebastian, the drunk butler, Stephano, the jester, Trinculo and his dear friend, Gonzolo. Ariel uses their magic to ensure that no one is harmed in the storm and instead, is placed carefully around the island. While the royal crew is wondering about the island, Prospero and Ariel play tricks on them. Will Prospero exact his revenge on the crew that caused him much misfortune or will his show mercy? 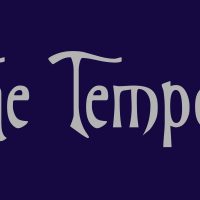