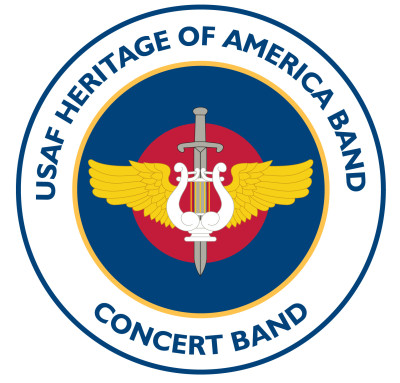 The Concert Band is comprised of over 40 professional Airman-musicians who captivate audiences on regular tours throughout the East Coast.

For six decades, the USAF Heritage of America Concert Band has educated, inspired and entertained over 1.5 million people annually, by providing music for events that support Airmen and their families, honor our Nation’s veterans and build relationships of trust between the American people and their Air Force. The Concert Band is comprised of over 40 professional Airman-musicians who captivate audiences on regular tours throughout the East Coast with a variety of renditions of great orchestral classics, marches, Broadway hits, jazz standards, movie music and patriotic favorites.

The band has appeared with many world-renowned artists, produced over 55 highly-acclaimed recordings and has performed at thousands of high-profile, community outreach and military events. The band’s music is often heard on television, radio and the internet, and serves to communicate and convey Air Force core values of integrity, service and excellence to millions. These achievements have earned the ensemble worldwide acclaim as well as military awards, including eight Air Force Outstanding Unit awards, three Colonel George S. Howard Citations of Musical Excellence for Military Concert Bands and numerous Mayoral Proclamations.

Through the universal language of music, we COMMUNICATE U.S. Air Force and Department of Defense messages, making lasting connections with our audiences. Our community and civic outreach performances serve to instill patriotism, build partnerships, enhance the reputation of the Air Force and the United States, and demonstrate American values to the world.

We HONOR all who have nobly served in the United States Armed Forces by commemorating the contributions of our nation’s veterans – past and present – both at home and in deployed locations around the world.

We INSPIRE diverse audiences by displaying the highest level of professionalism, epitomizing military precision and excellence, telling the Air Force story and presenting the finest in musical culture and entertainment.

We serve as a dynamic element to RECRUIT our nation’s best and brightest to serve in the United States Air Force. In partnership with Air Force Recruiting Service, we perform for events that generate interest and enthusiasm for military service.

*This is a free event, but tickets are required for theater entrance. A limit of 4 tickets per person can be picked up at The Pullo Center Box Office beginning February 29.