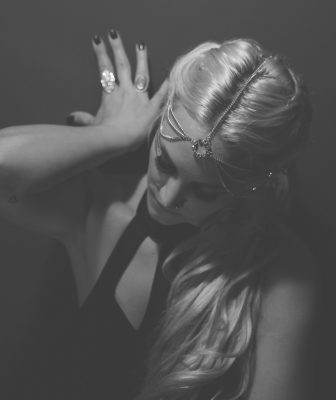 Zōe LaBelle is an enchanting singer-songwriter whose music casts a spell over her audience with a single listen. Through raw lyrics about heartbreak and perseverance, she unlocks a fiery feminine energy. This desirable diva’s songs may be moody and dark, but she uses their inescapable grip to entertain and enlighten as she casts her spell on unsuspecting audiences.

Discovered and signed by producer Chad Taylor of the alternative rock band LIVE, Zōe is a contemporary artist with a genre all to her own. With a style that lies somewhere between Adele, Norah Jones, or Lana Del Rey, her passionate hooks are ready-made to cut through the pop fodder of today’s radio playlists.

“When I first heard Zōe, I knew she was an artist with an old soul, and I was compelled to work with her. There is a heritage of singer-songwriters who have a special ability to tell stories within their songs that transport the listener to another place. Zōe is in this class. I was moved by the music and wanted to help her record and arrange musical orchestrations that would bring each song to life.” – Chad Taylor, Producer

With the support of veteran radio personality Helen Leicht, Zōe has emerged on Philadelphia’s eclectic radio format WXPN, having recently been featured on World Café Live. Leicht says, “When I first heard Zōe sing, I knew she had ‘it.’” Fueled by heartache and determination, the deep roots of her music lie in the city of Philadelphia, despite being born in a small rural Pennsylvania town as Dana Alexandra Zbozien. The heart of an artful city radiates through Zoe’s soulfulness, a Philly sound that can only be compared to namesake Patti LaBelle or even the more blustery Nona Hendryx.

Zōe’s upcoming album showcases the wild side of her fast-paced city life and her complete metamorphosis from a small-town girl to an untamable showstopper. While her lyrics symbolize a strong woman with the insatiable drive for amorous adventure, they also suggest that she knows when to be serious. This perfect three-way balance among a wild white witch, logical lover, and soulful songwriter will keep listeners on their toes with every note. “Evergreen” is a deeply personal song about the end-of-life conversations she had with her mother before her passing. The final refrains echo in the darkness of the best blues ballads but also shadow truths about hope and eternal connectivity between a mother and her daughter. “Wasn’t Good Enough” and “The Lies” provide an even deeper look into her heartbreak with touching hooks that take listeners along for the emotional rollercoaster ride that transformed her into the confident, fierce artist that she is today.

While her haunting hymns wrap their chains around listeners’ hearts, Zōe breaks up the tension with irresistible, danceable pop singles like “Fortune” and “Kiss Me Carefully.” These songs have a strong, authentic feel of liberation and sensuality that cannot be mimicked.

Whether you’re seeking comfort after a breakup or tragic loss, need a boost of confidence, or want to let your hair down and dance, Zōe LaBelle’s gracious words and mesmerizing melodies serve as an outlet for the soul. With over a dozen songs on her upcoming album, Zōe LaBelle’s music is sure to pack a punch on the 2017 popular music scene.

Zōe’s record is due to release its untamable flame into the unwary cold this coming winter. The album’s heartfelt single, “Evergreen,” will serve as the end credit theme for director Lisa France’s forthcoming documentary Roll With Me, a film telling the story of Gabriel Cordell, a paraplegic determined to beat the odds. Cordell takes a gripping 3,300-mile journey across the United States in 75 days to become the first and only person to make this trip on a standard wheelchair. Fittingly, the stoic drama of Zoe’s music adds the uplifting closure to a story filled with many twists and turns.

Much like this brave cross-country traveler, Zōe approaches every unfortunate event with positivity and perseverance. This unstoppable attitude fills her songs with a vibrant spirit. She is currently preparing for her upcoming tour starting in the central Pennsylvania area; however, one look at her hypnotic eyes and vivacious performance insists that Zōe LaBelle has the authentic credibility needed to propel her to bigger stages across the globe. 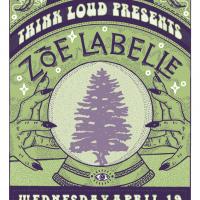