"We Can Build This City" Interactive Exhibit 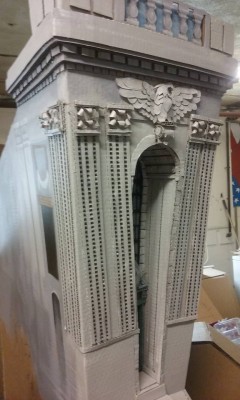 Visit the “We Can Build This City” exhibit.

Join the Cultural Alliance of York County, the City of York, the York County History Center, and artist David Lynch on October 16th at 11:15am at the Agricultural and Industrial Museum at 217 West Princess Street in York for a ribbon cutting ceremony to officially open the “We Can Build This City” interactive exhibit, featuring a six-foot tall walk-through version of the City of York constructed completely out of cardboard. The interactive installation, featuring detailed replicas of York City landmarks and cardboard cityscape built by the public, will debut as part of the “History on the Half Shell” family festival happening from 11am-4pm at the Agricultural and Industrial Museum.

The “We Can Build This City” installation was led by York visual artist David Lynch as a way to commemorate the City of York during its 275th anniversary. York County History Center President Joan Mummert will be on hand to cut the ribbon at 11:15am along with David Lynch and welcome the public to walk through the installation for the first time.  “We Can Build This City” will remain on public display at the Agricultural and Industrial Museum every Tuesday-Saturday from 10am-4pm through December 3, 2016.