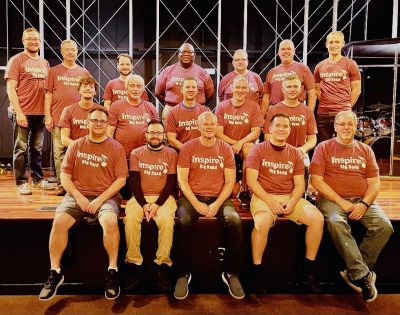 The Inspire Big Band is based out of Inspire Studio of the Arts, York’s premiere studio for jazz education and performance.  The IBB is a seventeen piece traditional big band made up of professional musicians from throughout Pennsylvania.
The Inspire Big Band will be playing selections from artists and arrangers of the past and the present. Music from famous jazz musicians like Count Basie, Duke Ellington, Thad Jones, and Stan Kenton to name a few. Arrangers such as Alan Baylock, Sammy Nestico, Bill Holman, and our own Steve Fieldhouse will be featured in the concert.
Our band includes band members Steve Fieldhouse, Craig Kenny, Dave Shultz, Chris Loser, and Wayne Fox are a few of the noted jazz players.
For a fun filled night of jazz standards and improvisation for our inaugural performance for the band, come to the Inspire Studio of the Arts.

Inspire Studio of the Arts