Pat Godwin has blossomed into one of the most clever and prolific, comedy songwriters in the business. Pat first got national airplay with the holiday classic he crafted with his brothers James and Jack called, “Let’s Put Christ Back in Christmas” from the album Reindeer Games. After that, it wasn’t long before Godwin’s talents were being used on radio morning shows; a medium Pat is more than familiar with. He’s appeared on every top morning show you can think of, worked for 6 years on Philadelphia’s Morning Zoo, and was a frequent guest and contributor to both Howard Stern’s radio and TV show.

Liz Russo has just filmed for the standup comedy show “Laughs” on Fox TV. She has opened for Colin Quinn, Gilbert Gottfried, Jim Norton, Artie Lange, and Lisa Lampanelli. Liz has been featured at the Laugh Your Asheville Off Comedy Festival in Asheville, North Carolina and is featured at the 2015 Gilda’s Laugh Fest in Grand Rapids, Michigan. Liz Russo is a regular part of the Odd Squad on Raw Reality with Gail Kasper on WMCN44 and a performer at such comedy club venues as Caroline’s On Broadway, The Comedy Stop at the Tropicana Casino and Resort, along with other casinos, events and comedy clubs nationwide. Liz is a plus size model and has done numerous print ads for Boscov’s and a nationwide packaging advertisement for Lady Morgan thermal underwear. Currently, Liz is also filming for a sitcom pilot that hopefully will be pitched to a major network later next year. 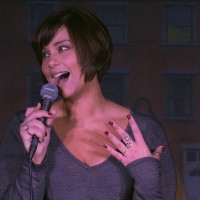