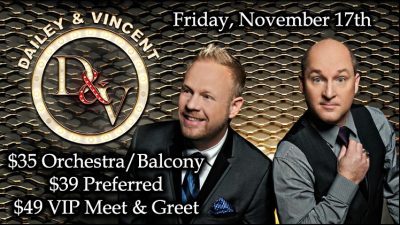 Jamie Dailey and Darrin Vincent, backed by one of the best bands on tour today, are some of the most reputable and elite entertainers in American music; bluegrass, traditional country and gospel music. The concoction of the fantastically instinctive vocal blends of Dailey’s tenor and Vincent’s reedy harmonies, has gained them well-deserved praise for their own distinctive style and worldwide recognition as American Music gold. Dailey & Vincent has garnered world-wide attention with their first national, top-rated television series, “The Dailey & Vincent Show,” on RFD TV and over 500 airings of their PBS special “Dailey & Vincent ALIVE ¬ In Concert.” $35 Orchestra/Balcony, $39 Preferred, $49 VIP Meet & Greet

Their most recent CD, Dailey & Vincent ALIVE, debuted at #1 on the Billboard Bluegrass charts and remained at the top position for over 15 weeks. In 2017, the dynamic duo will reach even greater heights, with an induction into the prestigious Grand Ole Opry, an exhibit in the Bluegrass Music Hall of Fame celebrating “A Decade of Dailey & Vincent – an All-American Music Journey,” along with other standout performances including their third appearance at Carnegie Hall, plus hosting their annual music festival LandFest in The Mountains in Hiawassee, GA. 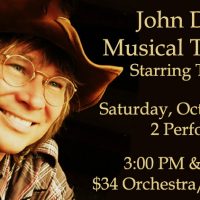 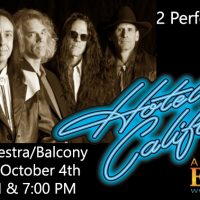 Hotel California - A Salute to the Eagles 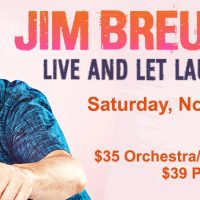