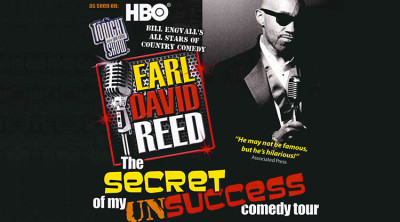 Earl David Reed’s genius is the way he interacts with the crowd. He has a way of knowing just who to pick on to get the biggest laugh, and the audience loves it! The Las Vegas Review-Journal called him “…an urban Don Rickles!” And Don Rickles himself commented “This guy works the room like a Las Vegas showgirl…funny without being offensive.” His TV credits include The Tonight Show with Jay Leno, HBO, Showtime, FOX’s Comic Strip Live, A&E’s Comedy on the Road, and NBC’s Friday Night Videos. Earl can also be seen on DVD as one of Bill Engvall’s All-Stars of Country Comedy comedians with Larry the Cable Guy and Jeff Foxworthy. Adult Content: Ages 18+.