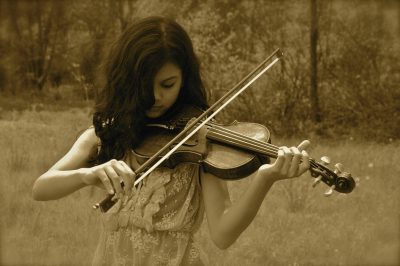 An outstanding interpreter of early European Jazz of the 1930s and 40s (in the style of the Quintette du Hot Club de France), Daisy Castro has emerged as a revitalizing force for the genre. She stuns first-time audience members, and continues to enthrall even those that have seen her perform many times before. Her dynamic playing channels some of the early greats, while adding a modern edge to the Jazz Manouche (the French name for “Gypsy Jazz”) tradition.

Daisy has been an active member of the Gypsy Jazz community, both in the United States and in Europe, since she was 14 years old. She has played on stages on both continents with all of the masters. Now, at the ripe old age of 20, and with three recordings of this style under her belt, she has earned the respect of said masters and their knowledgeable audiences, which is no small feat in this heavily male dominated genre.

Daisy will appear onstage with Quinn Bachand on lead guitar, Max O’Rourke on rhythm guitar, and bassist Greg Loughman. Quinn comes from Canada’s West Coast where he performs frequently with his sister Qristina. He has been nominated a total of 16 times for prominent Canadian awards. Max and Greg are from the popular Gypsy Jazz group Rhythm Future Quartet.

The Daisy Castro Quartet will be promoting Daisy’s new project, World On Fire. While still rooted in the same style as her earlier recordings, this one reaches even further around the globe for its influences. Encompassing everything from Django compositions to traditional Turkish and Greek tunes, the CD opened up a whole new world of exploration.

The energy created when the Daisy Castro Quartet comes together is quite impressive. The musicians are all honored to be among the new generation of players helping to bring this beautiful music forward from the past into the future.