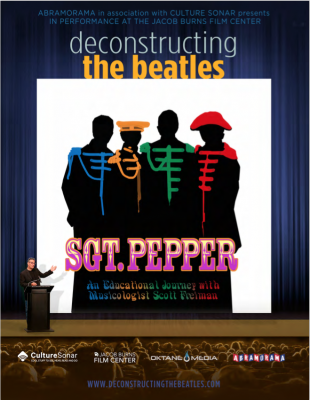 The Beatles’ Sgt. Pepper’s Lonely Hearts Club Band is one of the most influential albums of our time. Rolling Stone described it as “the most important rock & roll album ever made – an unsurpassed adventure in concept, sound, songwriting, cover art and studio technology by the greatest rock & roll group of all time.”

Mr. Freiman conducts an entertaining and educational journey into the creative process of The Beatles’ Sgt. Pepper performances and recording sessions, encompassing such iconic, era-defining songs as “With A Little Help from my Friends,” “Lucy in the Sky with Diamonds” and “A Day in the Life.” Audiences are guaranteed to leave amazed at The Beatles’ boundary-pushing innovation and creative genius.