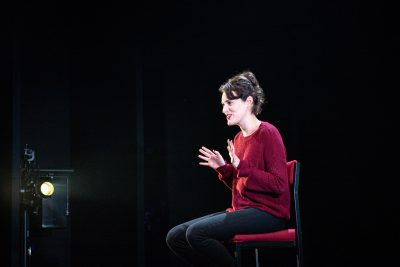 National Theatre Live brings the best of British theatre to cinema screens across the UK and around the world.

With state-of-the-art filming techniques, tailored to every play, we bring you each performance as it happens, in all its glory. From close-ups that capture every flicker of emotion, to sweeping wide shots of the stage, you’ll have the best seats in the house.

And you’ll be part of something much bigger. There’ll be thousands of other people all around the world watching along with you. Sharing every gasp, every laugh, every dramatic moment.

This is theatre for everyone.

Written and performed by Phoebe Waller-Bridge

Fleabag is a rip-roaring look at some sort of woman living her sort of life. She may seem oversexed, emotionally unfiltered and self-obsessed, but that’s just the tip of the iceberg. With family and friendships under strain and a guinea pig café struggling to keep afloat, Fleabag suddenly finds herself with nothing to lose.

The hilarious, award-winning, one-woman show that inspired the BBC’s hit TV series (now on Amazon Prime), was captured live on stage from London’s West End in 2019.