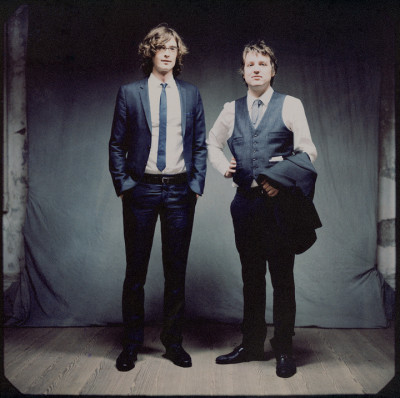 Monterey starts with a world in flames and closes at a graveside. In between, The Milk Carton Kids take us on a road trip across a dream – perhaps a nightmare – through an America of blood and fire that is at once recognizably the land of our forefathers, and the product of our own making.  Monterey is The Milk Carton Kids’ third album and the follow-up to their 2013 breakthrough The Ash & Clay. Kenneth Pattengale and Joey Ryan wrote and recorded Monterey not in studios but on stages – those concert halls, churches, and theaters across North America that have always coaxed the band’s most uninhibited expressions. Stealing minutes in the odd, uncertain lulls the road always seems to offer; recording in daytime hours on stages which would transform hours later into those familiar backdrops for their celebrated live performances; recording alone through the night in Nashville’s historic Downtown Presbyterian Church — their methodology in making Monterey allowed The Milk Carton Kids, finally, to perform for the record with the same fearlessness and spontaneity usually only achieved in live concert. Within the lyrics as well, this new album dwells in contradiction, as it chronicles the constantly moving tug-of- war between the freighted, immutable past and a tentative, uncertain future. This is a duo that feels comfortable in juxtaposition, creating their harmony from the friction at the intersection of opposites.