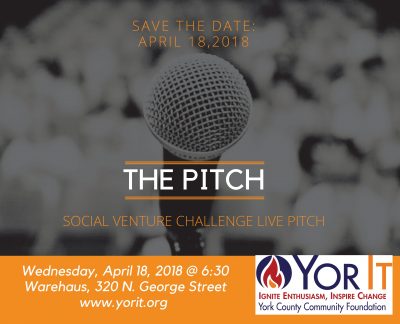 Our live event will feature our finalists competing in a live pitch in front of an audience of YorIt members AND community members.

Special Guest Speaker: Matthew Stinchcomb
Matt is the Executive Director of the Good Work Institute (previously known as etsy.org).  Prior to this, he was the VP, Values, and Impact at Etsy.com.  In that role he oversaw the stewardship of the company’s mission, and worked to give all employees the means and the desire to maximize the benefit their work has on people and the planet.  In 2013, he was named a GOOD Magazine ‘Figure of Progress’.  The next year he was named as one of the Purpose Economy 100.  In 2016, Matt was selected as a BALLE Local Economy Fellow.  Matt also serves on the Board of Directors for the Schumacher Center for New Economics, the Center for a New American Dream, and Naropa University.  He is a graduate of Oberlin College and lives in Rhinebeck, NY with his wife and two sons.

Doors open at 6:30pm, Live Pitch starts at 7pm.  The event is free and open to the public, but seating is limited.